Already I was feeling prosperous.

At home there was a big pot of vegetable barley soup on the stove. Banana-chocolate-chip-walnut muffins were fresh from the oven. It was a Sunday morning at the beach, with surf that threw waves on the sand, making pools deep enough for Jeb to float (or cannonball).

There was a blue sky with cotton ball clouds, accented by the circling of angelic white, long-tailed Tropic birds. Once in a while they’d swoop low above us.  There was me, and the Bohemian Lover that sat at my side. The bird’s heads moving, quickly scanning us below, clicking calls from their throats, then gliding away.

Jeb and his friend were nearby, relocating beach weeds to create a new ecosystem of greenery and pools from a nearby waterfall and stream.

Looking North, there was nothing but ocean and horizon. Waves that never ceased. Our bare skin was warmed in the late October sun.

So when it was time to go home, I was feeling to be a wealthy woman as I left the Lover, the birds, the sun and surf. I was still humming as I gathered the young boys and we began the stroll back to the car.

And then the goddess washed up at my feet.

Well, technically, she was embedded in the sand – just a bit – like any self-respecting buried treasure would be.

Yes, there it was. A golden coin, about 2.5 inches in diameter, peeking up from the wet shoreline. Engraved on one side, was the Hindu goddess Lakshmi (Gaja Lakshmi, to be exact) where she sat upon a lotus flower flanked by elephants and imparting gifts with her four hands. The coin’s other side was carved in Sanskrit in the shape of a bursting sun of light.

His friend inched closer to peer at the coin which was now in Jeb’s tight grip.

“We’re rich, Mom! This is gold. It’s worth a million dollars!”

We continue walking, the boys side by side, studying the coin, taking in the mystery. I’m smiling, still in the sky, sky, sky, sky…now with even a little more sparkle to the magic I feel.

At day’s end, after soup and muffins, I do a little Lakshmi study:

Lakshmi, the goddess of wealth, happiness and beauty emerged from the ocean of milk when the Gods churned it to produce Amrita (divine nectar) and she at once became Vishnu’s consort. She is pictured as an ideal of slim-waist, full breasted feminine beauty. When she is depicted separately from Vishnu as in this case, she has four hands: in two of them she is holding lotus flowers, while the other two bestow the gifts of well-being and prosperity. Lakshmi is said to reside in sweet-smelling floral garlands which bring fortune and wealth to the wearer. She also has a role as a fertility goddess and is particularly linked to the richness of the soil.
(source:  http://www.goddessgift.net/lakshmi-gajalaksmi-brass-OM-BST156.html) 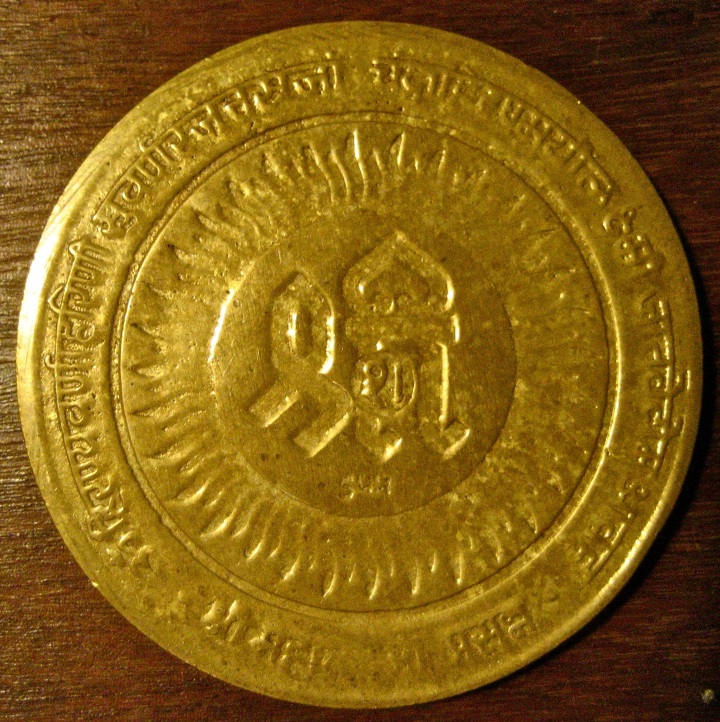 Wealth comes in so many forms. A healthy body, a bowl of warm soup, the vision of a bird in flight. The look of wonder on my son’s face. A kind man removing a bee sting from my finger.

And if life wants to offer a golden coin from the goddess of prosperity to wash up at my feet, so be it.

For those days when I’m feeling downright in the dumps and desolate, I’ll soak up these reserves. Let it permeate my cells. Fill up with the golden love. Vow to shine it all around.

3 thoughts on “When the Goddess Washes Up at Your Feet”